Geogrid has an increasing number of applications in the hardscape industry. Traditionally used in segmental retaining wall applications, the use of it in driveway or other paver projects has become more and more popular. Not only is it an inexpensive way to add to the longevity of the hardscape projects that you are installing, it is also a great way to help your company stand out from your competition when explaining to your clients the benefits of this project.

When we meet with clients, we always have a small piece of fabric and geogrids that we use in our installation on a keychain that allows us to show off what this product is and explain to them the benefits of using this product in their install. It has helped us build authority when meeting with clients and to ensure them that we are there to build them a project that is going to stand the test of time.

There are a few varieties of geogrids and they each have their own applications. This article covers everything you need to know about geogrid.

Geogrids work by interlocking the granular material or soil placed on top of them. The holes in the geogrid are referred to as apertures, and it is these holes that allow for the strikethrough or the pushing through of the material into these holes that create lockup and the stability that comes with that. It works similar to that of a snowshoe as it spreads the load on top of it out over a larger area helping to disperse that force that is experienced.

Along with the aperture size and a well graded, angular granular material, the strikethrough and compaction helps to interlock these granules to create optimal performance of the geogrid. The lesser the granules of the aggregate, the less they will lockup in the apertures of the geogrid providing less stability. Think of the fine granules of a sand trying to lock into the larger apertures of geogrid and how difficult that lockup is to achieve. In addition to this, soils and other materials pull apart under tension caused by a load. However, geogrids have the strength to withstand that tension allowing for that load distribution.

Geogrids are used in retaining walls, patios, walkways, driveways, as well as in further applications beyond the residential hardscape industry including embankments, steepened slopes, bridge abutments, and roads or other structures. Geogrid is used in slope stabilization, soil stabilization, and soil reinforcement.

This geogrid has strength in one direction and is used predominantly in retaining walls. It is produced using a combination of high tenacity polyester or polypropylene yarns that are twisted together with a single yarn then weaved or knitted forming flexible junctions and is coated in an additional protective layer of polyvinyl chloride (PVC) or latex. These geogrids are more flexible than the other two based on what they are made of. This makes them an excellent solution to be placed and squeezed between two layers of retaining wall block using the weight and locking mechanism of the retaining wall blocks to tie into the wall creating one solid mass. Using geogrid in a Segmental Retaining Wall application (SRW geogrid), along with a proper batter or setback of the wall, can increase the height to which a retaining wall can be installed to. 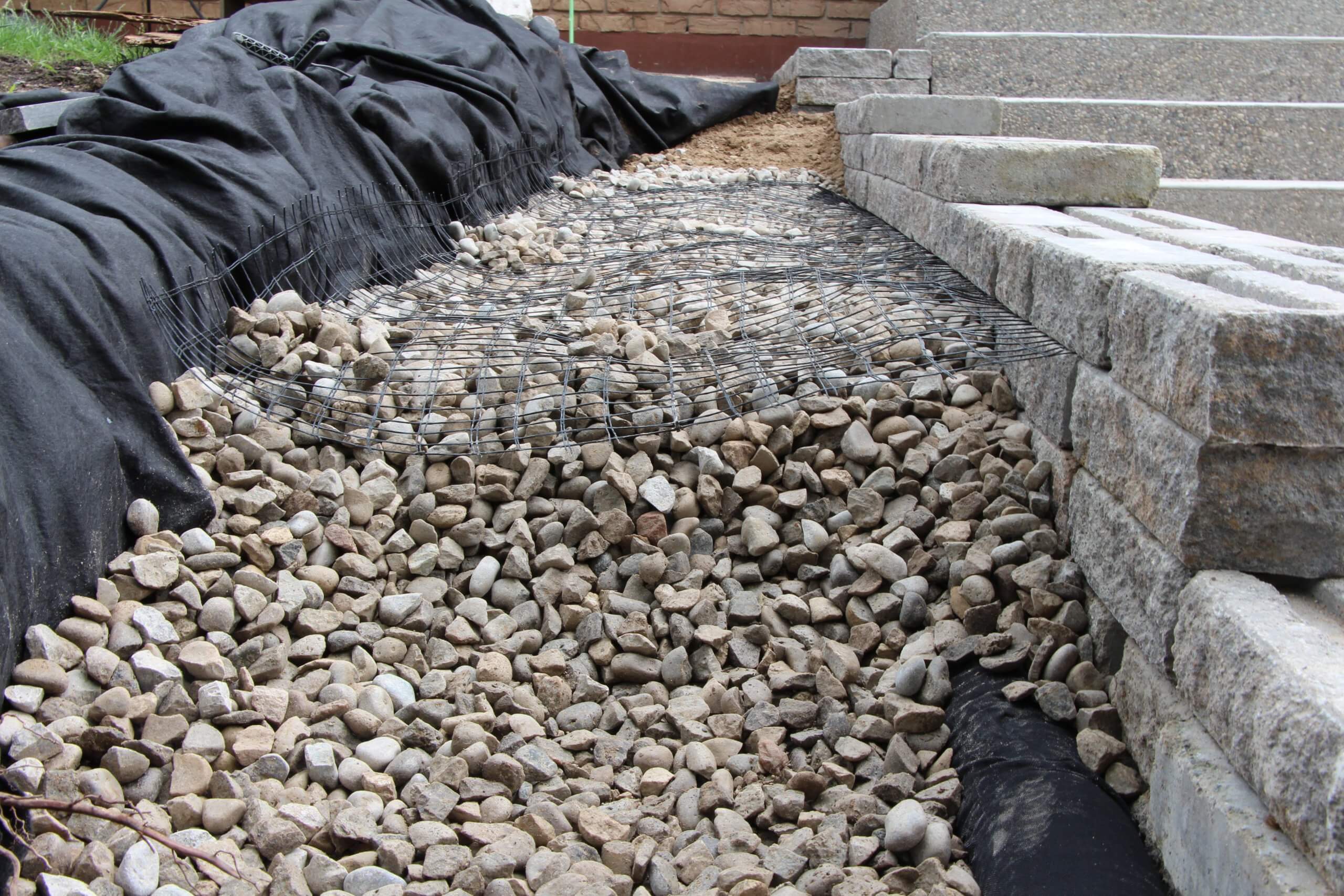 When installing the uniaxial geogrid in a retaining wall, it needs to be rolled out perpendicular to the wall at a length specified in the manufacturer’s specifications which will depend on the height of the wall, subgrade and soil conditions, and the load that the retaining wall is supporting. It is important that the roll is rolled out in the correct direction to the wall as uniaxial only has strength in one direction. If it is rolled out parallel to the wall or not following the manufacturer’s instructions, it will not provide the stability required in that application and this may cause the wall to fail.

Typically the geogrid extends through the backfill material of the retaining wall, usually some sort of angular crushed aggregate, and into the structural soil beyond the retaining wall. The apertures reinforce the soil behind the wall preventing the movement and subsequent force that would be applied to the back of the retaining wall. It is never overlapped in its installation and requires a minimum of 4″ of aggregate be placed on top to achieve its performance of stabilization. 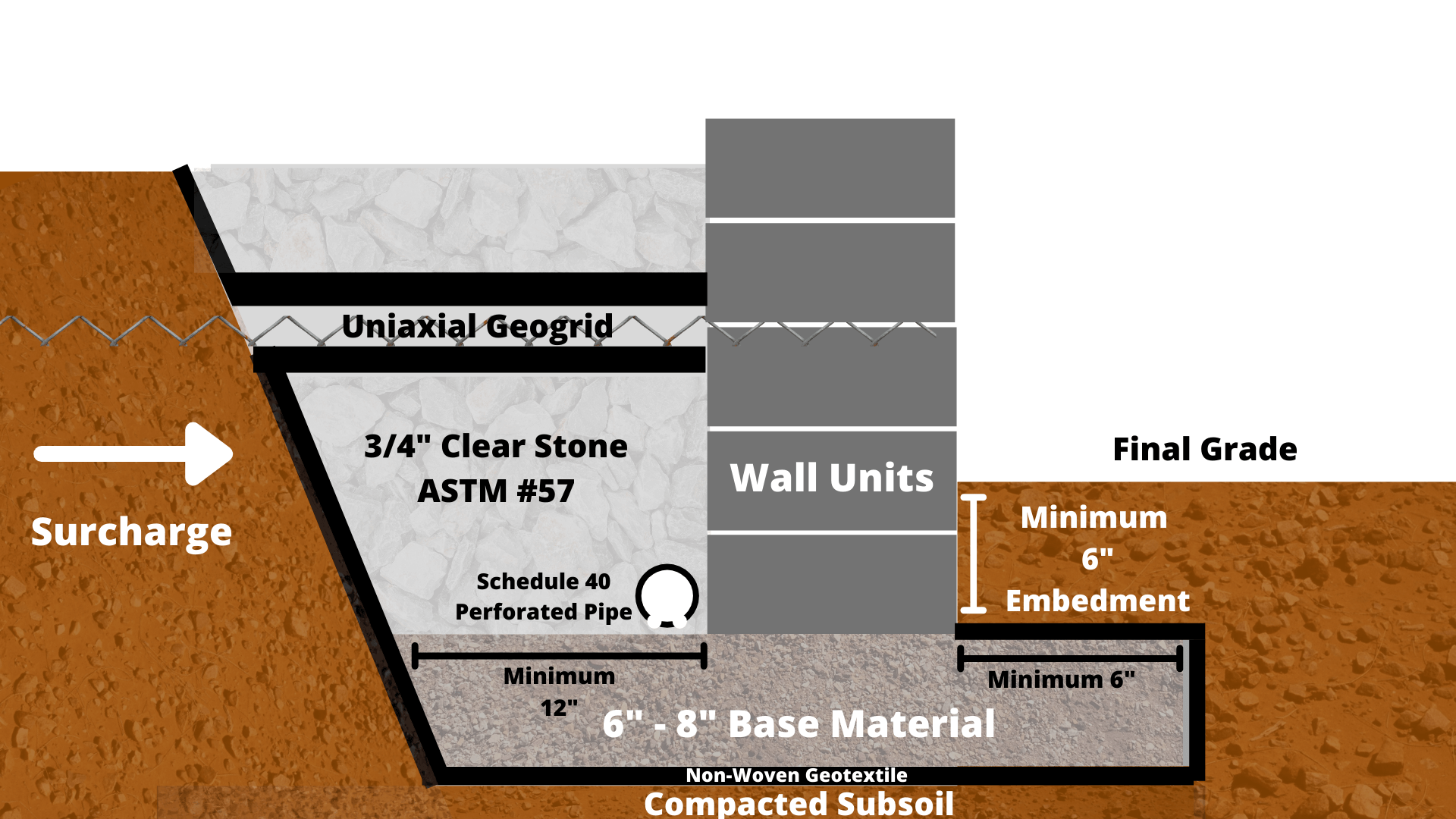 This geogrid has strength in both directions and has several applications including the stabilization of aggregate base material of pavement structures. It is made of polypropylene that is stretched in both directions providing tensile strength and holes are punched into this creating the apertures. These holes are square and this grid is more rigid compared to a uniaxial geogrid.

The load on the surface of pavement causes aggregate and soil to move in every direction. Think of a boot stepping into mud. The mud that was previously underneath the boot moves in every direction outwards and up surrounding the boot as it is forced into the mud. This is what is happening, to a lesser extent, when a dynamic load moves on top of pavement. That load is distributed through the pavement and downwards into the base material and subgrade. Installing a biaxial geogrid as deep into the surface as possible with a minimum 6″ overlap between pieces allows for the interlocking of aggregate to prevent the movement of that base material and subsequent subgrade under the load experienced on the surface of that pavement.

In our business, we specifically use biaxial geogrids in raised patio applications where we want to tie in every side of the retaining wall and stabilize the aggregate base underneath the pavers, creating one complete system. 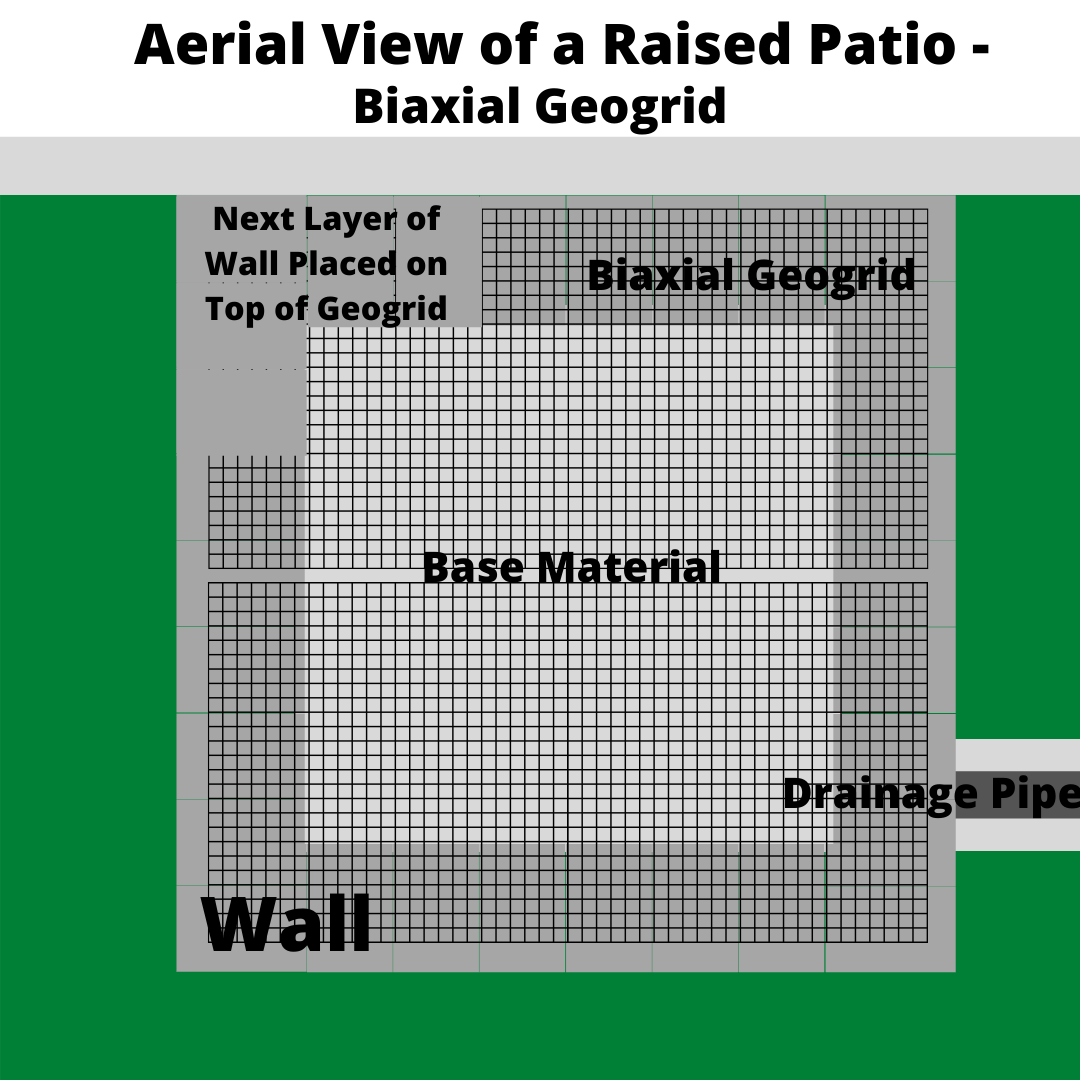 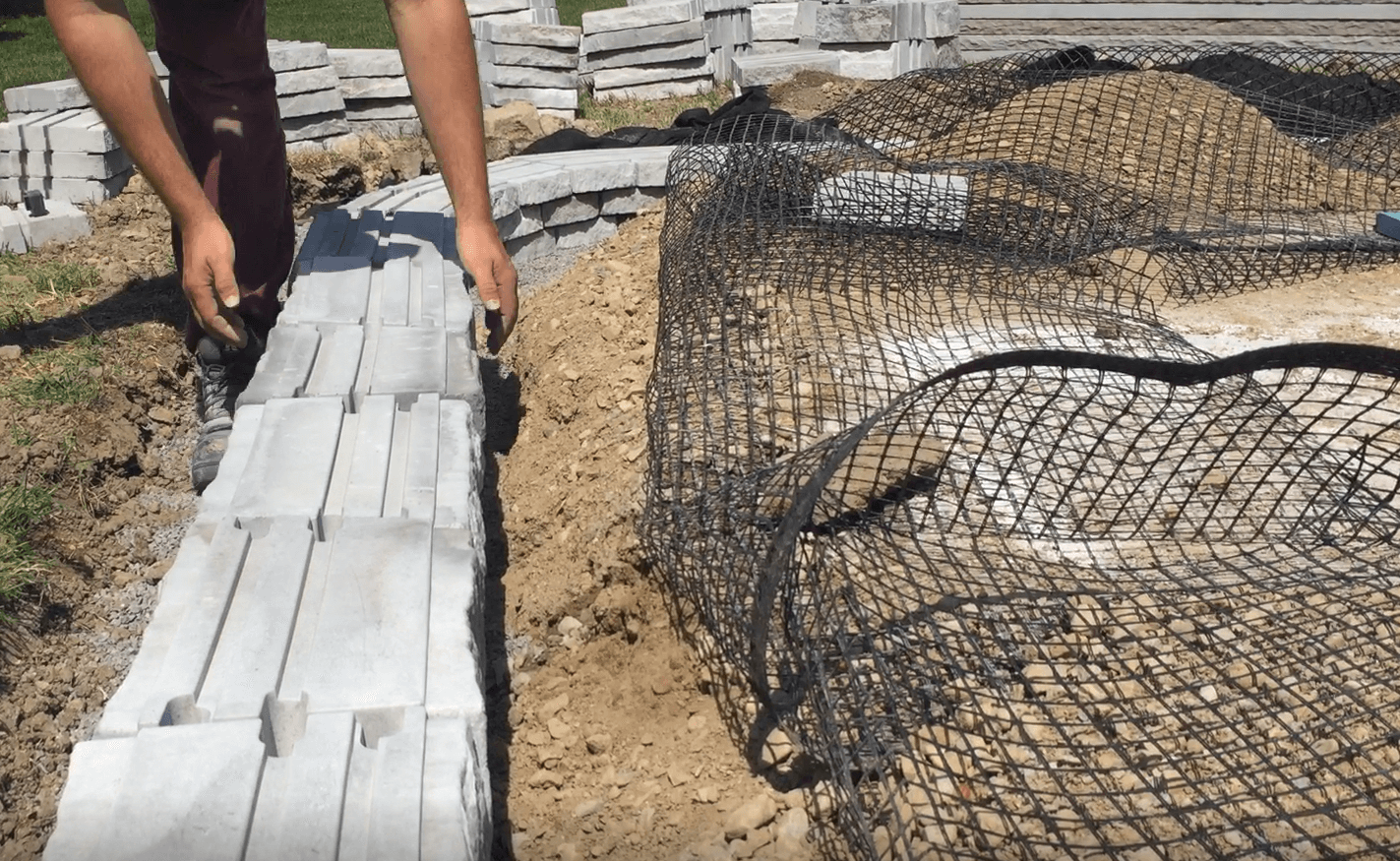 This geogrid and the next one have similar characteristics in their installation and application.

Tensar triaxial geogrid was created for improved performance over biaxial geogrid. The change came in the form of triangles rather than squares as the apertures and reinforced ribs. In soft soil applications, this can be placed at the bottom of the base to help stabilize the base material placed on top, spreading the load over a wider area. This can also limit the amount of excavation that would be required in a typical installation.

Once again, this would require a minimum overlap of 6″ from piece to piece and sees the most benefit when installed as deep into the base as possible. After 12″ to 14″ the benefits begin to decline, so another layer of geogrid may need to be installed. However, there should be at least 6″ of material on top of the final layer of triaxial geogrid. If a stiffer base is required closer to the bottom of the paver, then it can be installed 6″ below the bottom of the paver.

Geogrid can act as a separation layer of the subgrade from the base, but high silt content in the subgrade could migrate up into the base with traffic. A non-woven geotextile is recommended directly under the geogrid as a separation layer to prevent fines from migrating through. The non-woven geotextile can be stretched slightly and with the geogrid placed on top of it, we can still achieve the strikethrough of the aggregate through the apertures to create lockup.

Combigrid is an additional option for a geogrid that combines biaxial stabilization as well as separation as it combines geogrid and geotextile fabric. Flat polyester and polypropylene ribs are passed by rollers at different speeds stretching the ribs and orientating them properly. These are fed into welding equipment where they are cross-machined and welded together and then adhered to a non-woven geotextile.

This product saves a step in the installation of both a fabric and geogrid. Instead of having to roll out two rolls in separate steps, this can be rolled out at once and provide the separation and stabilization that may be needed in heavy silt applications to prevent that silt from travelling up into the base material over time while still providing the stabilization that geogrid provides.